Scoop uses the term 'app' to refer to an application or program to be installed. You might also see it used to loosely refer to a manifest that describes how to install an app.

An app is a self-contained, independent unit. It contains one or more executables or scripts. But that's probably too much of an explanation—generally you'll know an app when you see it.

Probably the main reason for the term 'app' is that it only takes 3 keystrokes on 2 keys to type.

In Scoop, buckets are collections of apps. Or, to be more specific, a bucket is a Git repository containing JSON app manifests which describe how to install an app.

Scoop has a main bucket which is bundled with Scoop and this is always available as the primary source for installing apps.

By default, when you run scoop install <app>, it looks in the main bucket, but it's possible to install from other buckets too.

And Scoop supports adding other buckets. Anyone can set up their own bucket with their own set of apps, and other people can add and install from this bucket—they just need to know the location of the bucket's Git repository.

# Installing from other buckets

If you want to install from a bucket besides the main one, you need to configure Scoop to know about the bucket. For example, to add the optional 'extras' bucket, run:

The 'extras' bucket is a special bucket, in that it's "well known", i.e. Scoop already knows where this bucket is so you don't have to specify its location.

Just say the extras bucket wasn't well known, the way you'd add it would be:

You can run scoop help bucket for more information on buckets.

# Creating your own bucket

Here's an example of one way you might go about creating a new bucket, using GitHub to host it. You don't have to use GitHub though—you can use whatever source control repo you like, or even just a Git repo on your local or network drive.

An app manifest is a JSON file that describes how to install a program.

When this manifest is run with scoop install it will download the zip file specified by url, extract the "cowsay-psh-master" directory from the zip file, and then make the cowsay.ps1 script available on your path.

For more examples, see the app manifests in the main Scoop bucket.

If you want to install a program that's not included in Scoop, it's easy to create an app manifest yourself.

Here's how to create and install a manifest for an 'app' that says hello, in just a few lines of powershell.

If you want others on your network to be able to install from your app manifest, you could just put it on a network share location, e.g. \shared\files\scoop\hello.json. Then, for others to install your app, you can tell them to run:

If you ran some of these examples, you probably noticed a warning saying 'no hash in manifest'. For reference information on specifying file hashes and much more in your manifests, see the App Manifests reference.

If you want to maintain a collection of apps, see the page on Buckets for more information.

Auto Update is a tool for package maintainers. It automatically checks for new versions of an app and updates the manifest accordingly. It helps to eliminate much of the tedium of updating manifests, as well as reducing the risk of human error while doing so.

Here you will find an in-depth explanation of how the autoupdate part of an app manifest works.

Use checkver to query the current version of either a specific app or all apps of a bucket. Open a PowerShell/cmd, then cd into the buckets repository directory and run the following commands.

To query the current version of a specific app the bucket, run:

To query the current version of all apps of the main bucket, run:

In the output of checkver, you can see if an outdated app has autoupdate available. If so, you can run the following command to automatically update the respective app's manifest (using * will update all apps)

To use a bucket other than the main bucket, specify its directory as the second argument to checkver

# Add checkver to a manifest

Simplest solution is to use an regex and it will match it to the source of homepage. Example: 7zip

Use another url if the homepage doesn't contain the version. Example: gradle

Use a JSON endpoint with rudimentary JSON path expressions to retrieve the version. Example: nuget

Use the latest app release on Github by setting checkver to github and the homepage to the repository URL. This will try to match the tag with \/releases\/tag\/(?:v)?([\d.]+). The repository maintainer has to use Github's release feature for this to work. Pre-releases will be ignored! Example: nvm

Or use different urls for the homepage and repository. Example: cmder

Use capture groups for complex versions and use the results in the autoupdate property. This example will provide $version and $matchShort as variables. Example: git

# Add autoupdate to a manifest

For the autoupdate feature to work it needs a checkver property to find the latest version number.

Some examples with autoupdate and multiple $match variables:

There are several options to obtain the hash of the new file. If the app provider publishes hash values it is possible to extract these from their website or hashfile. If nothing is defined or something goes wrong while downloading/extracting the hash values the files will be downloaded and hashed locally.

Use the same URL as the file and append .sha256 to it. Example: openjdk

Use a different URL to checksums file (can contain multiple hashes and files). Example: nodejs

Use a different regex to extract the hash. Example: apache

Use a JSON endpoint with rudimentary JSON path expressions to retrieve the hash. Example: openssl

The following variables are available:

If you want to confirm an autoupdate works (e.g. after adding it to an existing manifest or creating a new one) change the version field to a lower or different version and then run or use the -f parameter

Check if the url, extract_dir and hash properties have the correct values. Try to install/uninstall the app and submit your changes.

scoop status compares your installed version against the current copy of scoop and bucket repository on your machine. If these are not updated it will output wrong version information. e.g.:

bin\checkver is only for maintenance and updating the manifests so they can be committed to the repo.

If you need to store data which should persist between updates you should use ~/scoop/persist/<app>/. Inside the manifest, the path to the data directory is available in the $persist_dir variable.

The PHP package uses it for the configuration files.

Directories and files can be added to the persist definition inside the app manifest. Persist data is linked from the installed application directory to the data directory with directory conjunctions or hard links.

During the installation, any persistent data is copied into the data directory and linked to.

The persist definition can be a string if only one item is needed or an array for multiple items.

There is a flag to purge all persist data when you uninstall an app. By default, the data will be kept until you remove it.

Scoop treats dependencies in a way you might not expect, especially if you're used to tools like NuGet or Bundler. These tools have to deal with complex problems around long chains of dependencies for specific versions of libraries. Scoop takes a simpler approach.

It's ok to just install the latest version.

If you were to install Git manually on a new machine, would you go looking for the specific version you had on your last machine to make sure everything works correctly? Or would you just grab the latest version from their website? Scoop assumes you probably want to do the latter.

If this makes you uncomfortable, remember that unlike software libraries which can have breaking changes between minor version increments, this is less common with programs.

Of course there are some cases where an old version of a program is still widely used and the new one isn't backwards compatible, like Python versions 2 and 3. Scoop has these cases covered too: you can install the latest 2.7 version with python27 and for the latest 3.x version it's just python.

Apps depending on other apps.

Sometimes an app needs another app to install or run properly. For example:

In these sort of cases, when you install an app Scoop will assume you want to install anything required that you don't already have and install these automatically too.

For software library dependencies, Scoop just side-steps the problem of version dependencies completely, as described above.

For app dependencies when installing apps, Scoop assumes you want the latest stable version of any dependencies. Again note that Scoop supports specific versions of apps too, e.g. an app could have a dependency on python27 (Python v2.7), or python (the latest stable version of Python). For updating apps, Scoop just does the bare minimum—if a dependency is completely missing it will install it, but if it's on an older version Scoop will leave it alone.

The current directory for apps is a special alias directory which points to the currently installed version of that app.

It allows path references to remain the same across app updates, since paths refer to the current directory alias rather than a hardcoded version directory.

For example, if I run ls ~/scoop/apps/git now, I see this output:

The current directory is not an additional directory, but a Directory Junction, pointing to the 2.11.0.windows.1 directory.

If you're paying close attention, you might notice the extra l in the Mode column of the output. But apart from that, you won't see much indication that it's any different from a normal directory.

If you're not familiar with directory junctions, you can think of them as similar to symbolic links, or even shortcuts. They are pointers to other locations in the file system. There are some important implementation differences between junctions and symbolic links, which you can read about here if you're interested.

The reason Scoop uses junctions instead of symbolic links is that symbolic links require admin permissions to create (although this looks set to change soon).

The main problem being addressed here is how to keep programs working smoothly between updates, even though the new program is in a different directory to the previous one. Shims do solve some of the problems here, by staying in the same place and updating the version that they point to.

However, some programs need to set environment variables, registry settings or other configuration after installation that point to the actual install path. Before Scoop used current directory junctions, these variables and settings would be pointing to the old directory after an upgrade, which was not ideal. By using a current alias directory and updating the alias, the settings would continue to point to the right location. 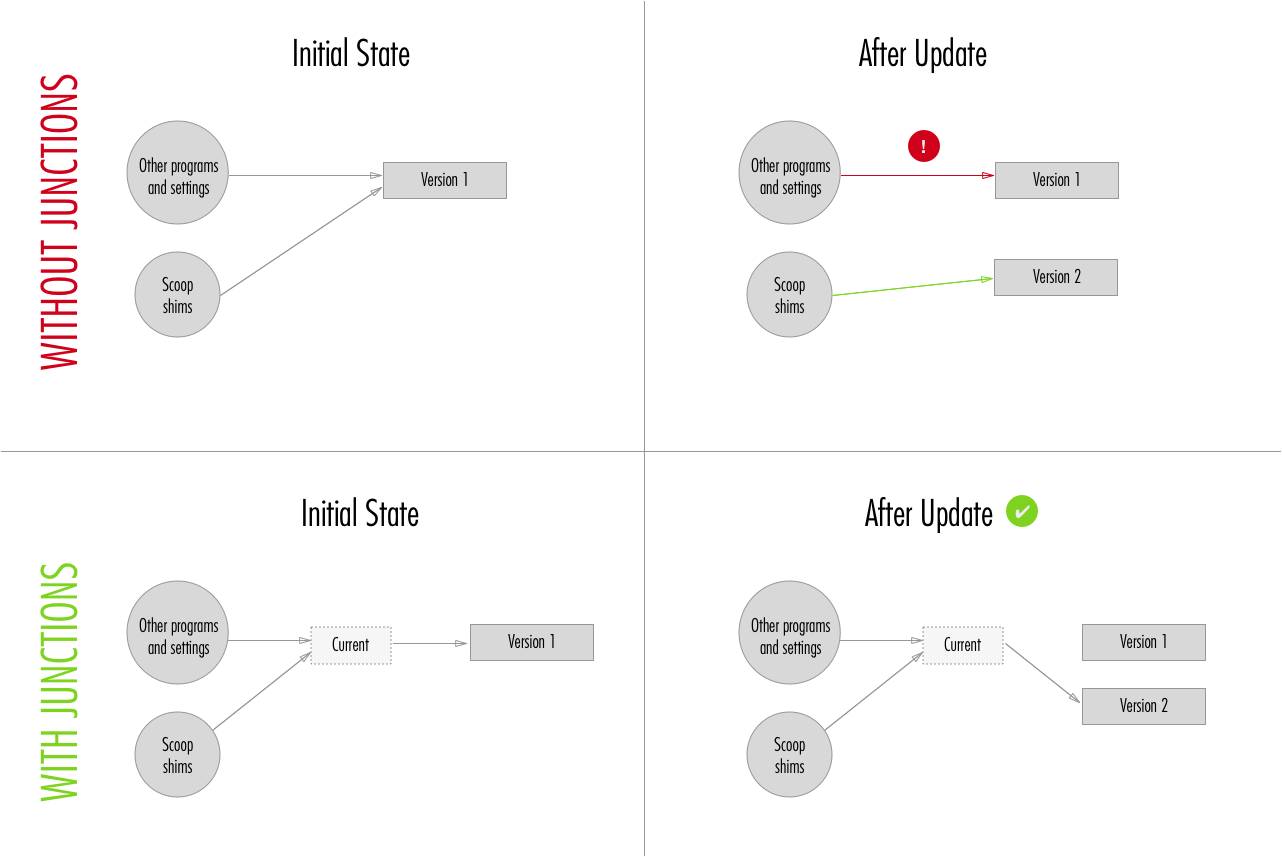